I recently upgraded my main desktop PC at home to the RTM version of Windows 8 and re-installed VMWare Workstation. All seemed well until I fired up a 4th VM and I began getting strange errors:

The operation on file **.vmdk failed.

After looking this error up it seems that it can occur not just with disk corruption but also when the host PC is running low on memory. My machine has 8GB RAM, VMWare was configured to use a maximum of 6GB and each VM had only 1GB assigned each, so I shouldn’t have been getting any issues there! Luckily, VMWare Workstation 9 was released a few hours after I got this problem, and installing that seemed to fix it!

Anyway, after all this I remembered that Windows 8 now comes with Hyper-V, so I decided to give it a try to see if it could replace VMWare Workstation for my needs. After just installing a basic copy of Windows 7 inside a Hyper-V virtual machine, I noticed that it was ridiculously quick to start up and shutdown. I timed it at 9 seconds to restart the machine from the login screen and back again, compared with around 18 seconds in VMWare Workstation!

Intrigued by this, I decided to delve a little deeper using the PassMark peformance testing tool. In the summary below, Hyper-V RDC is where I connected to the VM via remote desktop, and VMC is where I used the Virtual Machine Connection window from the main Hyper-V management console. The test machine has a Core i7 860 with 8GB RAM and a 256GB Crucial M4 SATA-III SSD. Each virtual machine was set to use one processor, 1GB RAM, with a screen resolution of 1024x768. 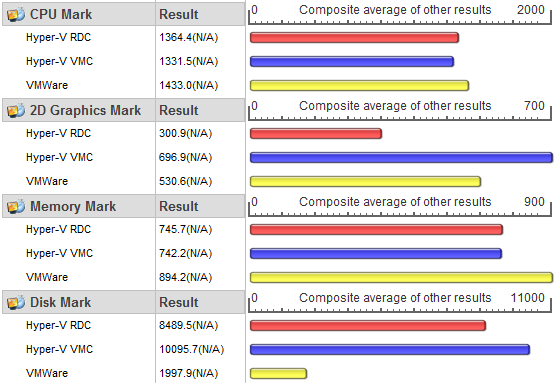 Here are the various test results in more detail: 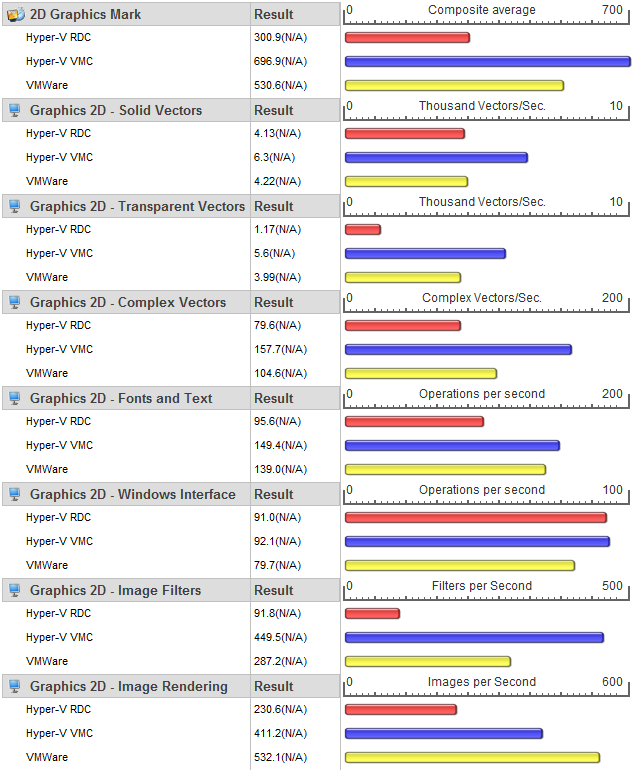 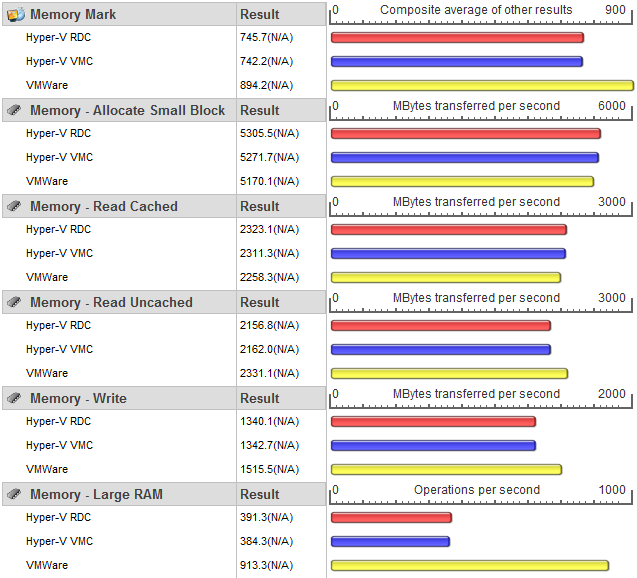 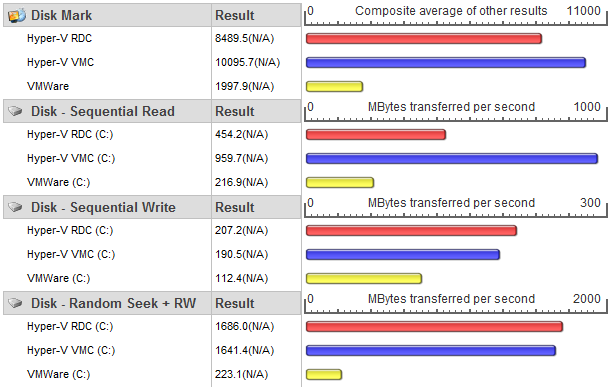 This extra disk speed really comes in useful for the kinds of tasks I use a VM for - i.e. repackaging and sequencing applications, and building test environments. Hyper-V is what’s known as a Type 1 Hypervisor, whilst VMWare Workstation is Type 2. Therefore Hyper-V should in theory have better performance when it comes to interfacing with the hardware. However, they are both writing to virtual disks via the host OS, so I wouldn’t have thought that would explain the massive difference in disk performance. Perhaps VMWare just have a bit of catching up to do when it comes to optimising for the latest generation of SATA-III SSDs. Also it should be noted that I was using the brand new VHDX format for the virtual disk in Hyper-V. Well that’s performance out of the way, but what about usability and features? I’ll summarise them here:

Another point worthy of mention is that you cannot run VMWare Workstation when you have the Hyper-V Platform feature installed on Windows 8 (the Hyper-V Management Tools are allowed though). If you have both installed and want to fire up VMWare, you’ll have to disable Hyper-V and reboot the machine first.

Back to something I mentioned earlier - remote access. I tried to configure my laptop with just the Hyper-V management tools installed to connect to the Hyper-V service on my desktop PC - both machines are in a Workgroup and using the new Microsoft accounts, a typical home setup. This should be a simple task, but unfortunately there’s lots of configuration required, and I still had to resort to a bit of a hack to get it to work in Windows 8. You can use the tool HVRemote to configure the client and server, although it has not been updated for Windows 8. I followed the instructions on that page, but still had to manually add my user account to the Hyper-V Administrators group. Also, even though I am using the same Microsoft account and password on both Windows 8 machines, it would not authenticate when trying to connect. I had to create a local user on each machine, and run the Hyper-V console via the RunAs command on my client to get this to work. If anybody else can get it to work without this workaround please let me know!

In summary, If you already have a VMWare Workstation license, you may wish to continue using it - but it you don’t, and you don’t require 3D graphics acceleration, there is a compelling case to just use the Hyper-V instance that comes bundled with your shiny new OS instead!

UPDATE: Real-world usage test I decided to run a quick real-word usage scenario to compare how the two performed before making a decision which one to stick with. I tested how long it would take to copy the installation files for Office 2010 x86 to the desktop and install it:

Some more interesting results here then:

These tests have proved that for me, it is not worth the hassle switching to Hyper-V at this time. If it supported 3D acceleration, automatic desktop resizing, drag’n’drop, shared clipboard, NAT and DHCP support in virtual networking, then Microsoft would have a contender, but I will be sticking with VMWare Workstation for now.