Back in App-V 4.x and earlier, the client could not quite cope with any apps that required admin rights. Since Vista, applications should have an embedded or external manifest file that defines the requested execution level, either:

If either of the last two were specified, the app would fail to launch as the sfttray.exe launch process was not compatible with UAC. The common fix was to add an environment variable to the package __COMPAT_LAYER=RunAsInvoker (note the double underscores at the beginning!). This would then instruct Windows to override the requested execution level with ‘asInvoker’ for all applications in that virtual environment. By the way, there are a few ways of checking the value used by an executable:

External manifest files are also possible, although Windows is configured by default so that the internal ones take precedence. This issue of not being able to launch these applications no longer exists in App-V 5 since it has been written from the ground up to work with UAC. If a sequenced application requires admin rights, it will also request admin rights when deployed on the client.

I was sequencing an application in App-V 5 that specified the ‘requireAdministrator’ setting - it only needed this so that it was able to write to a certain area of the HKLM registry for licensing purposes. Since the App-V sandbox allows full write access to the registry (and also optionally the file system as of 5.0 SP2 Hotfix 4), admin rights were not actually needed, so I was looking for the best way to suppress this UAC prompt to allow standard users to launch the application. Here are the options:

So I attempted to add this environment variable to my package to suppress the UAC prompt, by running the following command from an elevated command prompt during monitoring:

My solution was to alter the shortcut to run cmd.exe as a middleman; this process will be started, the environment variables added, then it will start my application which will inherit the variable from the parent process: 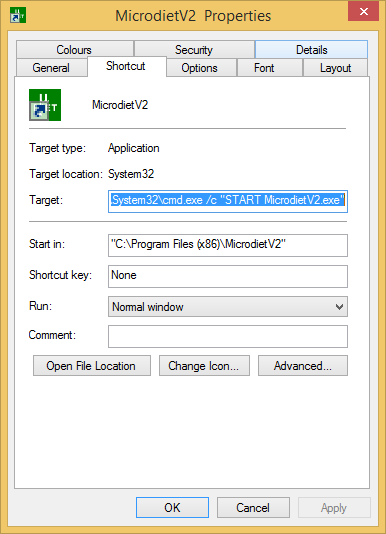 You will also need to manually set the icon and ensure the ‘Start in’ field is set to the application directory. This did the trick! No more UAC prompts and standard users can now launch the application.

This is a bit of a hacky workaround though, and in environments where cmd.exe is blocked for standard users, you will have to resort to an alternative man in the middle such as VBScript or PowerShell. Tim Mangan’s LaunchIt tool should in theory be able to do the trick also, or any stub exe that is capable of passing on parameters to launch another application.

Another way to do this is instead of setting the environment variable when monitoring, just set it as part of the cmd shortcut, e.g: